This past weekend the team attended Winter Baja at Michigan Technological University in upper peninsula Michigan. A staple event for us, we were able to take over 20 members who got to experience driving the car during a competition as well as the workout that is working carnage crew. 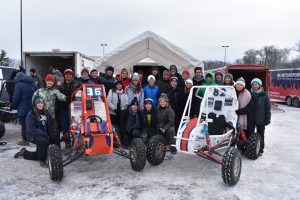 The team stayed in an airbnb outside of Houghton and had a blast exploring the lake, snowshoeing through the forest, and (most importantly) throwing branches at icicles.

Winter baja always provides a great opportunity for newer members to bond with the older members as well as learn more about quick fixes on the cars. This year we took two cars, Pollock and Roamer. Nik was elected captain of Roamer while Cassie was chosen captain of Pollock. Because we brought both cars, the two drafted their teams to compete and race against each other.

Dynamic at winter baja is very different to other competitions, consisting of one driver taking the car through a course of cones, getting out of the car, a second person eating a pickled egg, then a third strapping into the car once the egg has been eaten, and driving back over the snow. Only Pollock got to compete in dynamic, where Bella smashed it, eating the egg almost as fast as Jack last year. Mentions also go out to Danielle and Aleks who drove the event. Roamer did not make it before endurance began but Nik’s team still had a blast watching.

In an (almost) first for the Off-Road Illini, both cars finished the competition unscathed with no broken parts! Two tows were worrying for the team manning the pits but turned out to be nothing more than the cars needing an engine restart. Both cars were able to race the entire competition. A blizzard 3 hours into endurance cut the race short but luckily almost every general member got a chance to hop in the cars and drive. Some even got to plank on them. And everyone got pizza (and some new hair styles) at the banquet and awards ceremony.

The racing wasn’t done after endurance finished, however, as Aleks, Milos, and those who didn’t get a chance to drive at comp hopped in Pollock and drove around the airbnb driveway, executing some sick drifts. The team had fun exploring the house, hanging out in the hot tub, and (not saying any names) accidentally running into a snow bank and cracking a bumper.

Seniors were slightly emotional leaving the UP Sunday morning, reflecting on all the great memories of winter and were sad to leave for the last time. But the team was all excited and proud to have had another amazing weekend in Houghton. 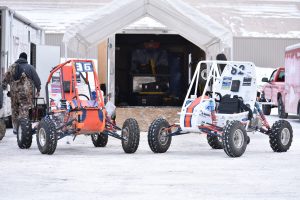