Despite Baja’s past leadership consisting of one administrative president and one team captain, the team has operated under a dynamic trio in the 2019-2020 season. With Baja being one of the fastest-growing engineering RSO on campus, leading the team has come with triumphs and many bumps in the road! Meet the Captains:

Switching things up from years past, Josh, Keira and Veronica decided to integrate a leadership structure of three team captains because they each felt equally qualified for the position, having sat in leadership positions before on various projects. They are each capable of providing the time necessary and the communication that their positions demand. All three can attest to the fluidity of their teamwork and the key to their relationship being the ability to listen to each other.

Each captain brings something special to the table, Keira has the administrative experience, Veronica specializes in rules compliance and chassis, while Josh supervises technical design projects and testing.

Being involved in Baja for their four years of undergrad, Josh Initially joined to gain relevant experience for a job in the engineering field. Keira was in search of a community to get involved with freshman year and thought “the car looked cool” and soon learned the professional value that the club provided. Veronica had played sports through high school and wanted to continue a side passion along her academic career. Since then, they have invested countless hours into building and fixing the car and described developing a “personal attachment” to it, driving their desire to stay involved. 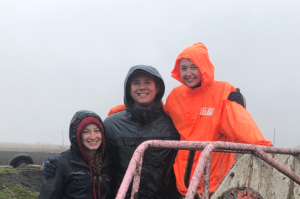 As with every engineering group, the trio have experienced their fair share of challenges along the way. One unanimous issue was the effect of unforeseeable time delays in project completion. Making use of limited resources, they faced setbacks with waterjet machining time and had to deal with problems that they could not do anything about beside improvise. In regards to dealing with each other, they admit they have cooperated well and have had minimal hiccups.

Josh, Keira, and Veronica share a favorite memory in Tennessee when a gear broke and the team reluctantly faced the idea of going home. The three worked together and used their acquired problem-solving skills to get a new gear. Their efforts helped the team place 3rd overall in the maneuverability competition, giving everyone high hopes and confidence going into the California competition of 2019.

Having all 3 this season has created an amazing environment for collaboration on the team and all have left a legacy that won’t soon be forgotten.