Steven graduated from U of I in 2019 and now works for F.H. Paschen as a project engineer in Chicago. Steven credits Baja with teaching him not only problem solving skills but also “resourcefulness.” He says “[The team] prepared me for the numerous open-ended challenges I’ve seen in the work place”. 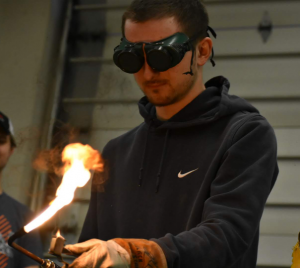 Steven’s time on the team could hardly be described better. Never one to shy away from a “Baja fix”, he was responsible for countless patch-ups and last minute design changes on both Pollock and Roamer and spent many late nights at the shop.

These late nights are some of his favorite memories of Baja: “I’ll never forget bringing Pollock to life the night before EOH and everyone gathered in the shop”.  A member of the chassis subteam, he also became the team’s designated welder, welding the frame as well as suspension components and tabs.

As far as advice for younger members, Steven says make friends with your teammates, because Baja “has the best people!” Keep up the good work Steven, thanks for all you did for the team!

What did you do on Baja?

I collected a ton of t-shirts (and a bucket hat which I proudly wear every chance I get), picked out the derpy knives, occasionally broke things, and DJ’d during shop days. And somewhere in there I was captain for a year.

How has Baja helped you in your career?

Baja helped me learn how to handle when things go wrong. It’s important to maintain a level head and not forget your problem solving skills in ambiguous or stressful situations. A whole lot of the real world is not necessarily knowing the right answers, but knowing which questions to ask to get there – and baja definitely left me scratching my head trying to get to the root of the cause of a problem more than once.

What are you excited to see this year?

I’m excited to see the 4WD designs this year! I’m also looking forward to the hype competition recap videos that the team always puts together, you guys do an awesome job with those!